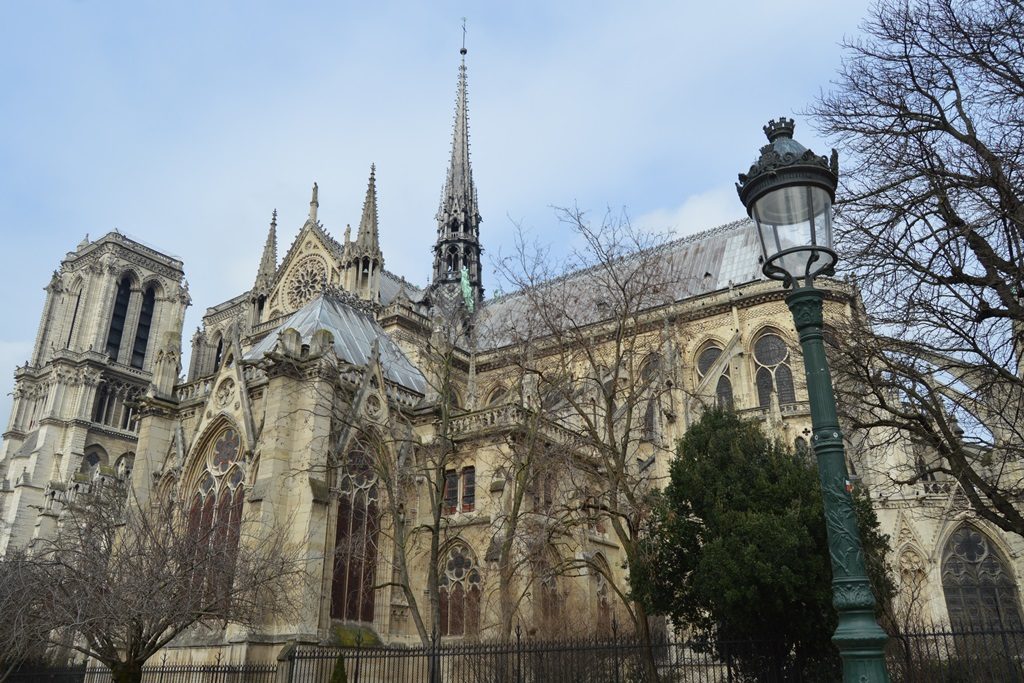 "Even the darkest night will end and the sun will rise."

"The greatest products of architecture are less the works of individuals than of society; rather the offspring of nation's effort, than the inspired flash of a man of genius..."

A year ago me and my husband visited Paris. We decided to go there due to my 30th birthday. We only had two days in this marvelous and extremely beautiful city. I remember, I wanted to write about that trip on my blog. I wanted to tell what can be visited in Paris in two days, what route we planned and also some advices where, how and for what price it's possible to spend the night/eat/buy an excursion.

But time went by and I only kept postponing writing the post for reason or another. I suppose, lots of things changed during this last year, therefore the post wouldn't be quite relevant. But several days ago happened something very unexpected.

I think, many of us were quite shocked by this horrifying accident that happened on Monday, April 15, namely, the Notre Dame fire (Notre-Dame de Paris). I admit, when my husband told me that evening that there was fire in Notre Dame, I didn't pay much attention, for I didn't expect it to be so terrible. Only when I saw pictures and videos of the cathedral on fire, my heart filled with sorrow. I was so shocked by what was happening that such silly and naive questions as "How could this happen? Why can't they put out the fire?" came into my mind. I started crying. This was my favourite cathedral. The real architectural monument, the pearl of the gothic style, it reminded us of human's capability to create something extraordinary beautiful. Notre Dame was the heart of Paris. 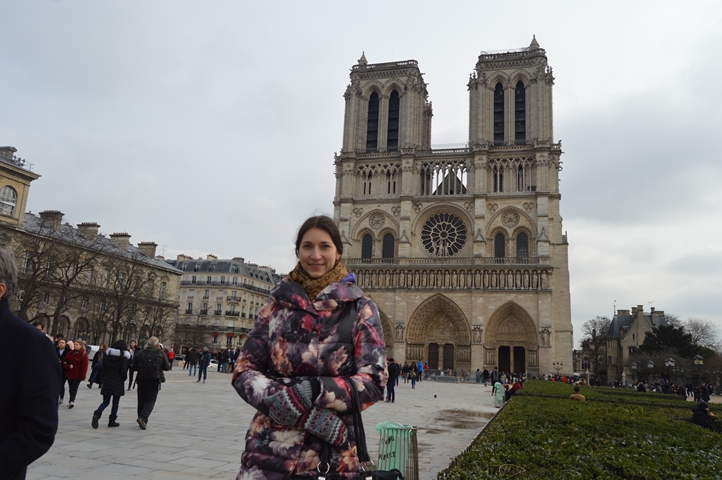 I've been to this wonderful city three times, and every time it was a couple-of-day-visit. But only on my third time I made my dream come true when I saw Notre Dame with my own eyes. The cathedral was so beautiful and magnificent, it gave me an incredible impession. I couldn't take my eyes off her. 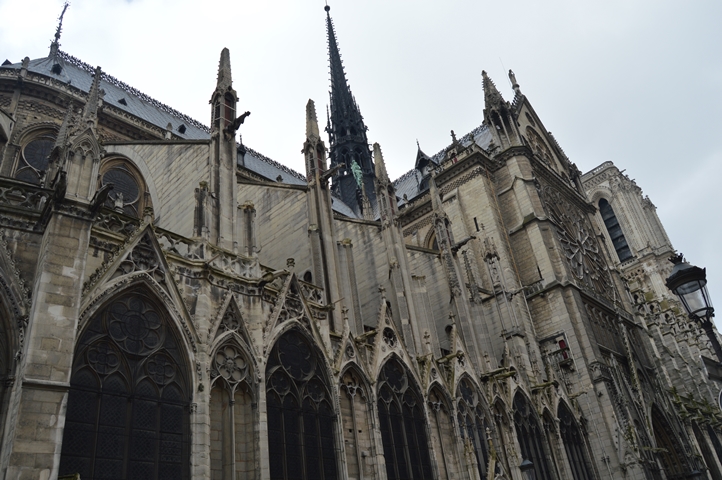 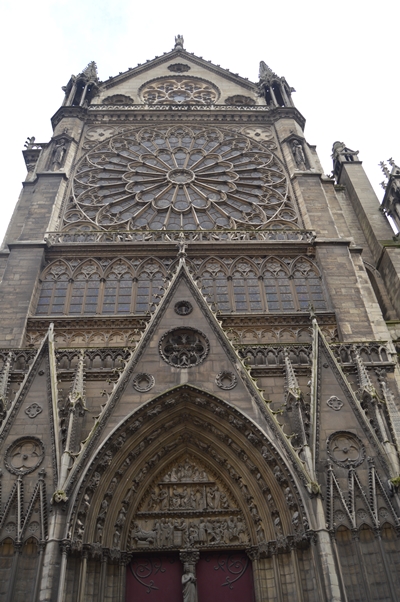 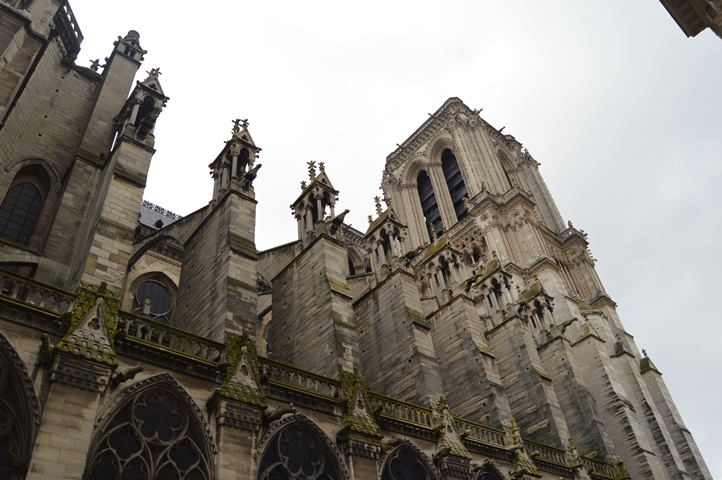 For we didn't have much time and the queue to the bell tower was so long, we decided to leave the ascent for the next time. But of course, we went inside the cathedral. At the entrance security checked all the bags in case there were some dangerous items. When we got inside, I gasped. The cathedral was as much magnificent from the inside as it was outside. Huge colomns, high vaulted ceilings, arches everywhere, stained glass windows of incredible beauty - all this impressed me entirely.

Mass was held in the cathedral. The organ was playing and the priest was praising God in Latin. There were candles lit everywhere. Despite the crowds of tourists, I had a feeling that I traveled back in time, many centuries ago. I remembered the novel "The Huchback of Notre Dame" by Victor Hugo and its Disney adaptation. 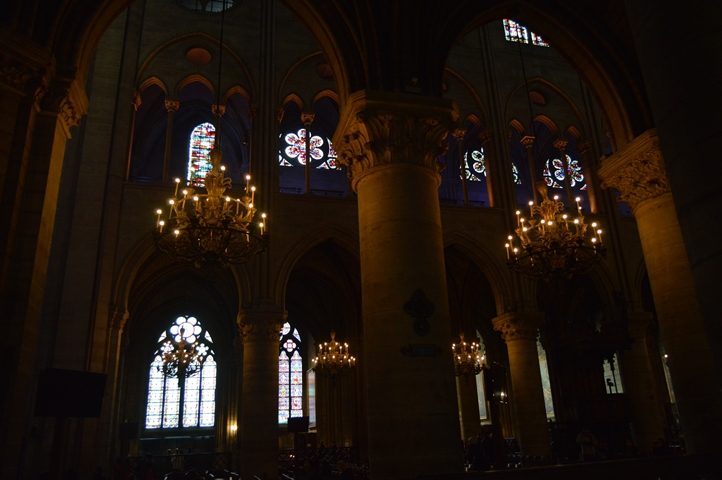 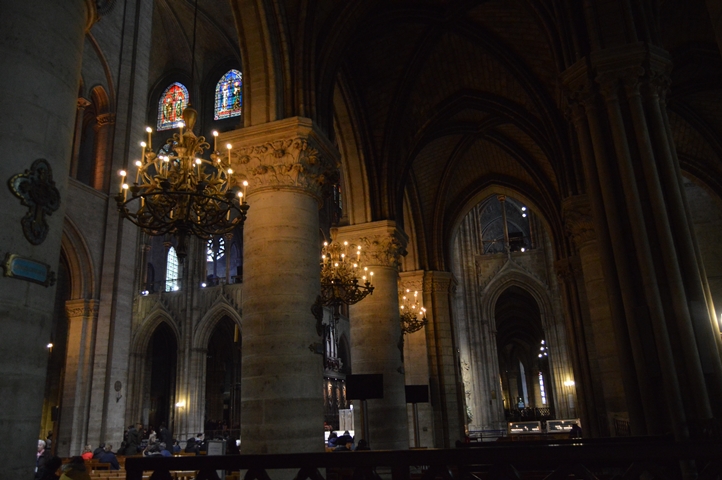 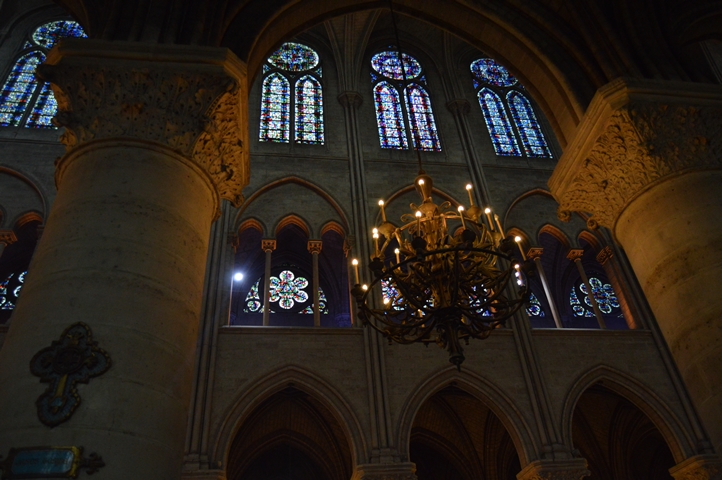 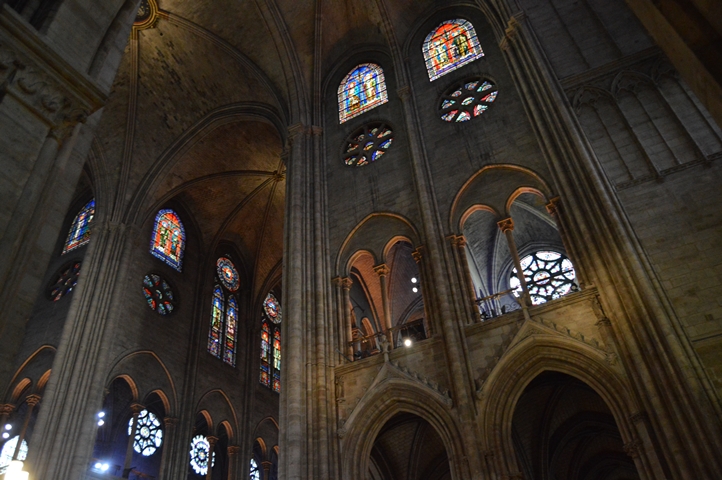 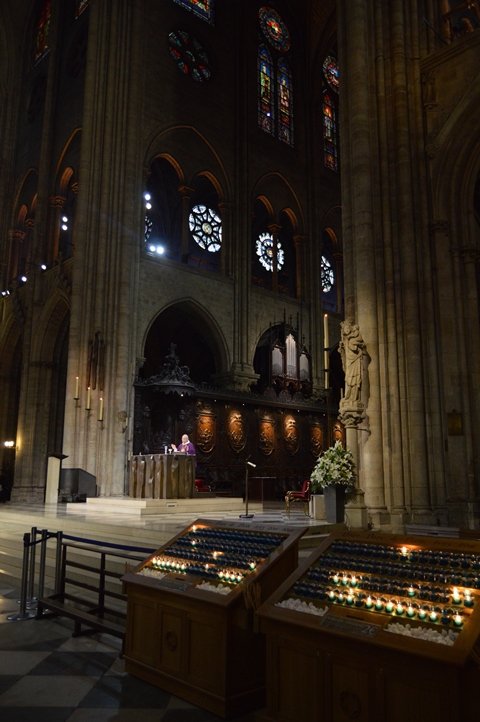 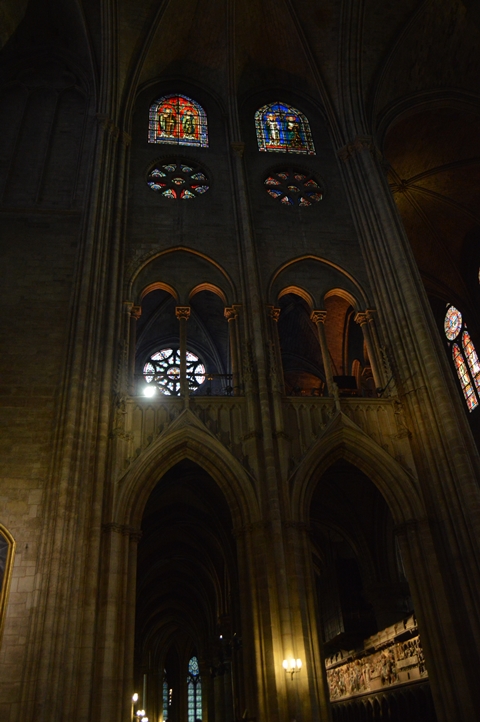 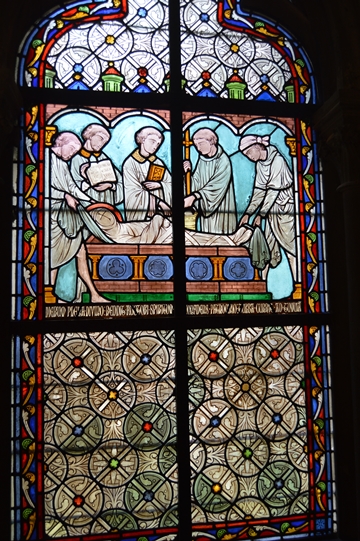 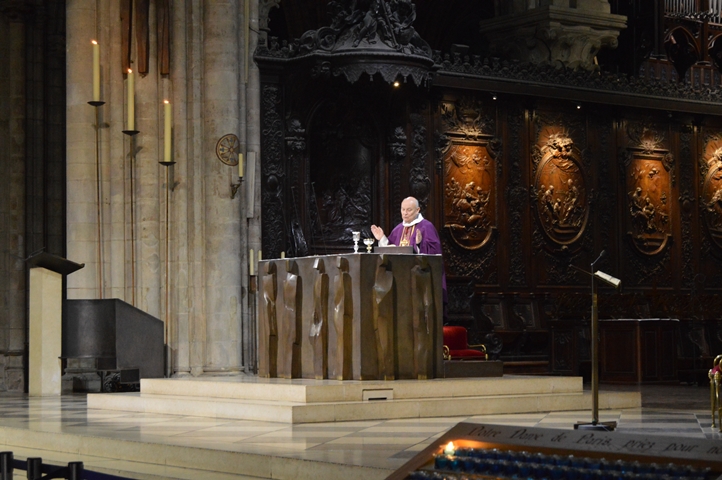 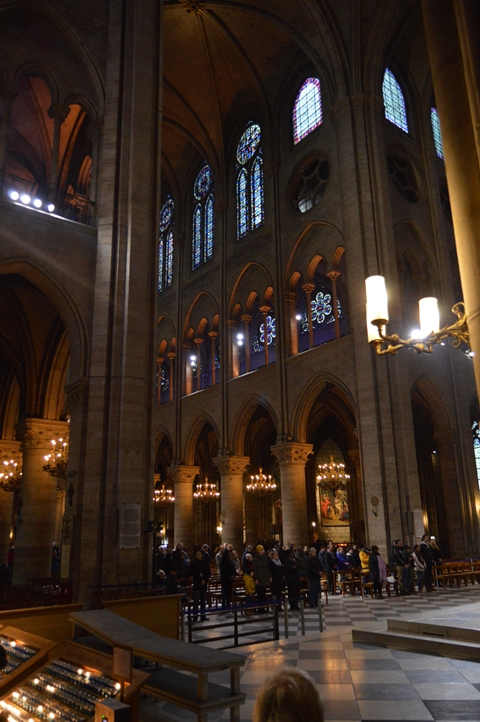 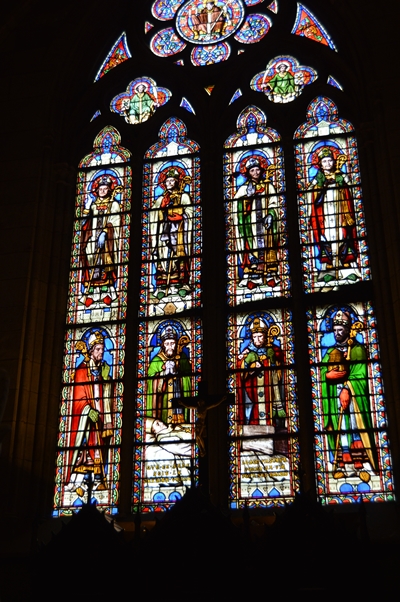 Inside the cathedral I felt such incredible energy in the air that tears came to my eyes. It is hard to describe with words how wonderful and beautiful Notre Dame is. When I touched its walls and pillars, it was as if touched the history of humankind. This was amazing!

We also visited the cathedral's treasury. The entrance fee was quite cheap, 5 euros or so. In the treasury we could find the collection of different goblets, crucifixes, jewls and other relics. But the main treasure there was Jesus Christ's crown of thorns. 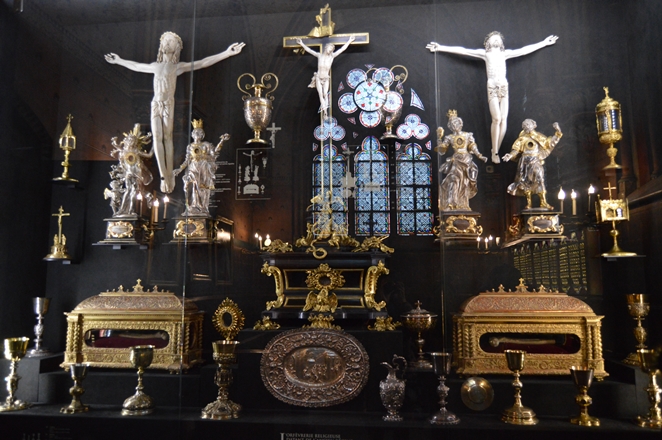 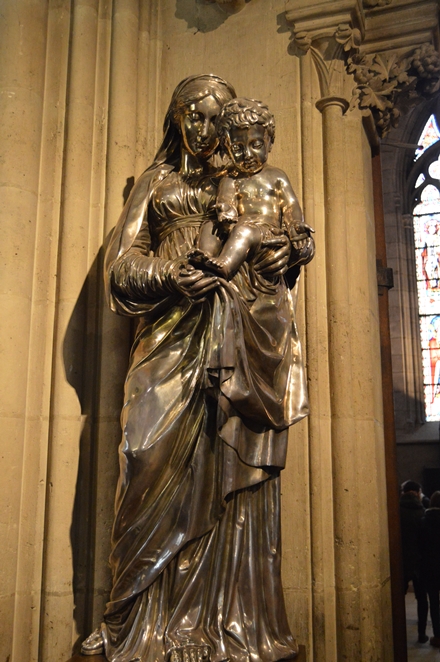 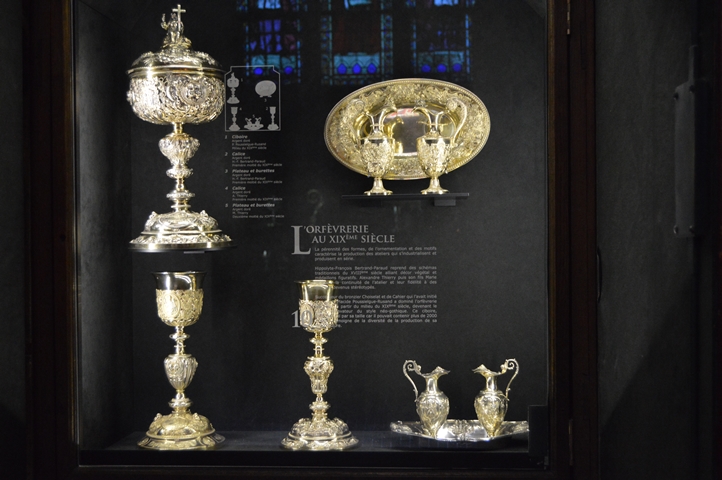 After having visited Notre Dame, we went to its adjacent garden. There was calm and quiet, there were flowers blooming everywhere and the birds were singing. We saw the back view of Notre Dame from the garden. Truly, Notre Dame is beautiful from every side. I really didn't want to leave that place, but we had to move on. I'll tell you about our two-day trip some other time. 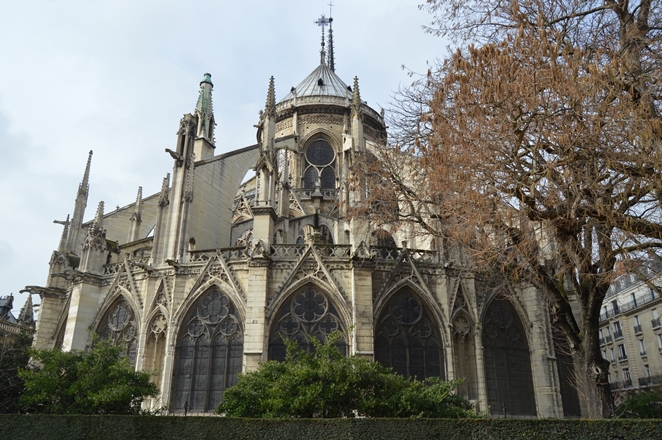 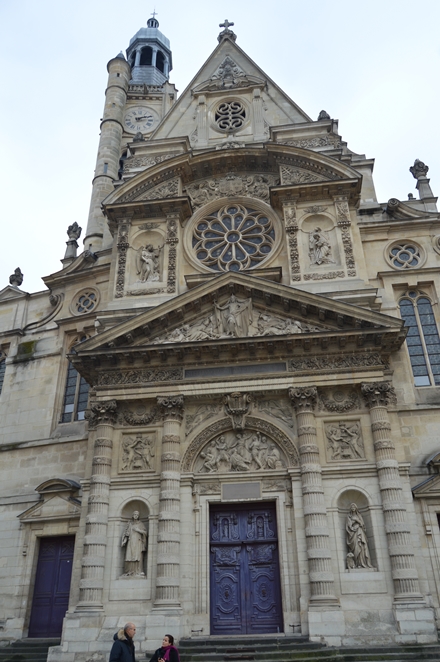 I have to mention, that there were also stands with Notre Dame's history inside the cathedral. All stages of construction were depicted in the pictures. In addition to stands, where were miniature model of Notre Dame and miniature construction site. 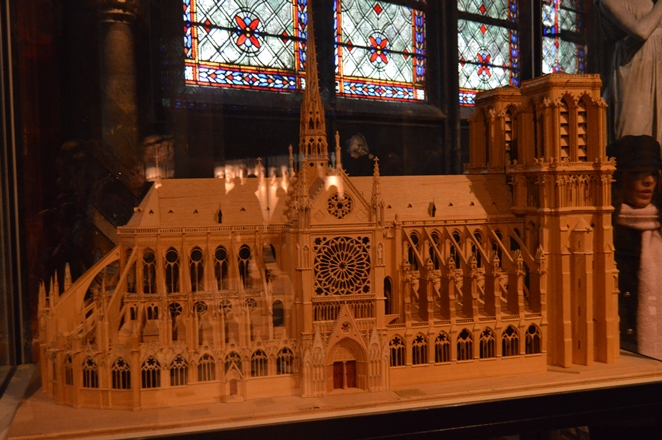 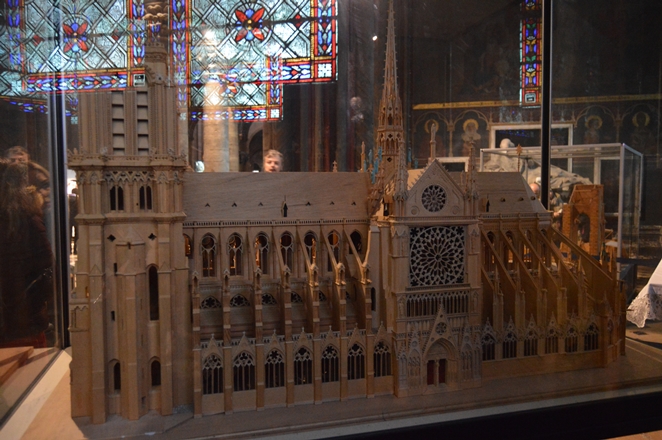 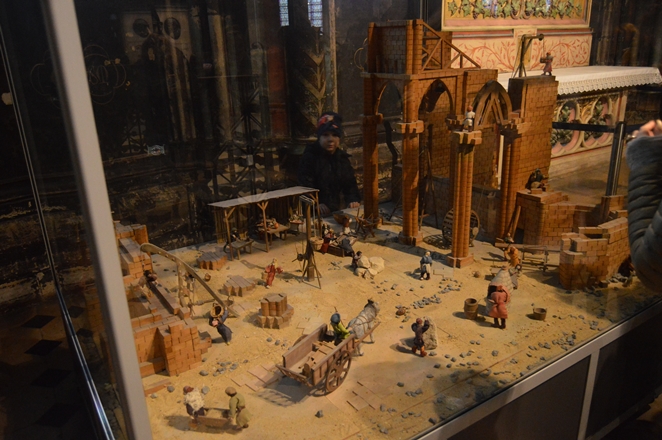 At the beginning of XIX century Notre Dame was in such a terrible condition that there was a question about cathedral's demolition. Then, in 1831, a French writer of the Romantic literary movement Victor Hugo published his well-known novel "The Hunchback of Notre Dame". Hugo's purpose was to save Notre Dame from the demolition. It is suggested that thanks to that novel, the cathedral was completely restored. The restoration took more than 20 years.

Notre Dame de Paris is one of those few places that amazed me with its beauty and splendor. It affected me to the bottom of my heart. I left Paris thinking that I would definitely come back to the cathedral just to walk through its halls once again and to ascent the bell tower. When I saw video of the cathedral caught on fire, all my dreams broke to small pieces. It was unbearable to watch the spire collapse. There was shock inside me. I couldn't believe that was really happening. I was afraid it was the fall of Notre Dame, and the hysteria that ruled throughout the social media only made it worse.

In the morning I felt even worse. When I woke up, I felt such pain from the loss inside me that it was even hard to breath. I guess, I realized by the morning what has actually happened. The first thing I did, was I surfed the internet in search of news. The fire was out, but it was unclear how great the damage was. It was written somewhere that the cathedral was destroyed and somewhere that it wasn't that bad.

Later the picture was clear. It appeared that either thanks to some kind of miracle or thanks to the work of firefighters (personally I think, we should thank both), the cathedral almost wasn't damaged inside along with the belltowers of Notre Dame. Also the stained glass was saved - the northern and the western roses. It also appeared the organ turned out to be safe. I read that it was gathered already one billion for the restoration of the cathedral! Now the future of Notre Dame doesn't seem so dark and hopeless. There is hope.

I thank those fearless firefighters for the huge job they have done and for their professionality in the fight with fire and for saving the cultural heritage of mankind. I know that many people thought that French firefighters were inactive and simply let the cathedral burn, I thought the same. Whatever stupid thoughts may come into one's head in the moment of shock and despair. Actually, the huge work was done while extinguishing the fire in order to preserve the cathedral. Firefighters were trying to save what could still be saved, and it appears, they managed that task brilliantly. You understand it only now, when everything is over. I found one very good explanation about how the situation developed and why so in Russian. You may read it here.

After having watched the cathedral burning, all I can do is thank God for that nobody was hurt in this awful disaster, excluding several (three, according to the news portals) people from the rescue service. But fortunately, even their injuries were light. I don't know whether it was pure coinsidence or not that the cathedral caught fire right after it was closed, but the tragedy would be far more terrible if it took the lives of innocent people, especially before Easter holidays.

Many are curious about how the fired started. Was it an awful, negligent carelessness of the workers or was it an intentional arson? Some people think it wasn't coincidence: the first day of the Holy week amongst catholics, right before Easter. I don't know...I am thinking, does it really matter? The reason won't change a thing. The part of Notre Dame burned out, it is going to be restored, and I really hope that one day I will be able to come back there and see it once again in all its beauty and splendor the way it was a year ago. No, I even believe in this. Notre Dame will rise again as a phoenix from the ashes and it will continue to delight us all with its beauty and magnificence.

I want to share one more post on Facebook with you. It was written by someone who went to check the cathedral and showed the present photos of Notre Dame. The post is also in Russian, you may read it here. 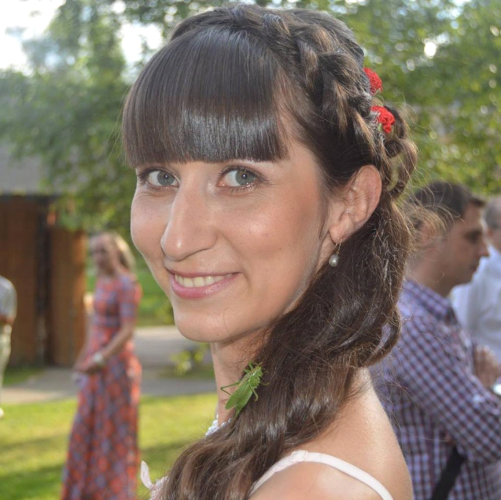